After several weeks of ground school, plus the obligatory survival school (SERE) and advanced water survival (DWEST), I began flying in the back seat and learning to operate the systems there, talk on the radio and do navagation.

Above is the actual aircraft in which I flew for the first time. During the 7 months it took to finish VF-121, I logged around 100 flight hours in missions that included air intercept, bombing, carrier qualifications and other miscellaneous missions. 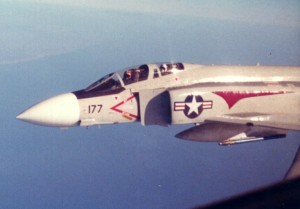 Most of the missions were conducted over the Pacific Ocean west of San Diego.

Some training flights were conducted over the Imperial Valley east of San Diego, near El Centro.

After finishing up VF-121 in early February, I was sent overseas to join a fleet fighter squadron, VF-21, on board USS Ranger which was steaming in the Western Pacific and the Tonkin Gulf.