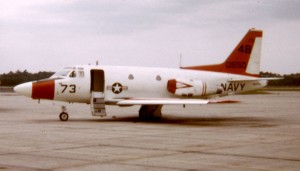 The first step to becoming either a Naval Aviator (pilot) or a Naval Flight Officer (weapons systems operator/navigator) was getting a commission. The three most common ways are the Naval Academy (Annapolis), Naval Reserve Officer Training Corps (NROTC) in a participating college or Aviation Officer Candidate School (AOCS) at NAS Pensacola. I never even considered the Naval Academy, the school I attended only had Army ROTC, so that left me the AOCS route. I went through a program called AVROC (Aviation Reserve Officer Candidate) in which I went to Pensacola between my junior and senior years of college, got the first 8 weeks of a 16-week commissioning program out of the way, then returned after college graduation to finish up.

After completing AOCS, I was assigned to VT-10 located at NAS Pensacola’s Forrest Sherman Field, as an Student NFO (my eyes were not 20/20, so I was not qualified to be a Naval Aviator). After 4 weeks of study, I was commissioned, then spent the next 3 months finishing up Basic NFO course there. After completing VT-10, I was selected for Radar Intercept Officer (RIO) training for assignment to an F-4 Phantom II squadron, and reported to Advanced NFO training at NAS Glynco, Georgia, on the south coast near Brunswick, in March 1972. After three months and almost 90 flight hours in the T-39D, I was winged and reported to NAS Miramar and VF-121 for West Coast F-4 training in June.

My first inflight photography opportunity in May or June 1972.